An American artist ASAP Rocky is in custody in Sweden.

Honestly I believe this is not only ridiculous but bizarre.  The artist and his staff were harassed for half an hour by two aggressive afghans that behave the way some of them,not all of course, often do in Sweden. I have had some as patients and they give bad reputation to all well behaving youth from Afghanistan.

These evil youths know that Swedes never punish them, instead the Swedes are taught by their feministic government that if anyone is aggressive that person needs help and support. So, aggressive and criminal youth in Sweden are overloaded with gifts and benefits as Swedes believe that if anyone is aggressive they should have benefits instead of punishments.  This also explains why Sweden probably wont survive as a nation and one alternative for the future is sharia law.

The attitudes these afghans showed towards ASAP and his staff are so typical for what is happening all over Sweden where Afghan youths now are 0,5% of the population.

Remember that Swedish jurisdiction caused Julian Assange to stay at an embassy for seven years before taken to jail for a rape that he absolutely did NOT do. I have read the full investigation that clearly shows that the two women Assange is accused of having  raped had voluntarily sex with him. Astonishing is that the Swedish women did not withdraw their allegations after Assange spent one year locked up in an embassy.   Did’nt they believe he thereby already was punished enough? For voluntary sex? 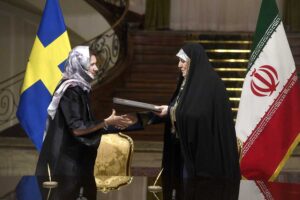 Above: Swedens feministic minister Ann Linde gets instructions from Iran.

Below:  Swedish governmental delegation show they are obeying orders from Iran. 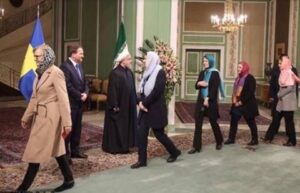 ASAP had the courage to fight back against the darlings of the anarchistic Swedish feminists i.e. asylumseeking ”children”, that often are males up to 40 years of age.  These feminists never admit any mistakes.    Which also explains why other real children are starved to death in malingering by proxy situations in Sweden.