Picture of Karl Sallin at Karolinska Institute. Dr Sallin is main author to article mentioned above that proves that Dr Jackson has been right since anno 2005 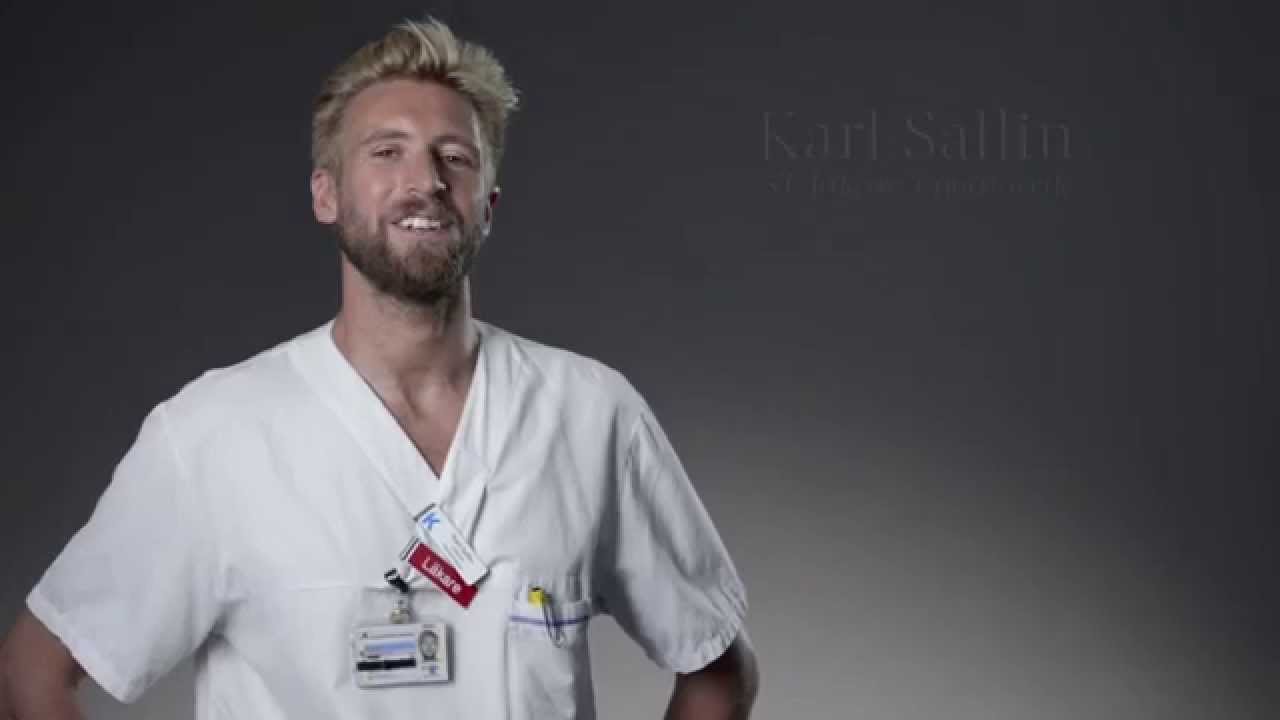 Under discussion you can read ”The records suggest that three patients were subject to malingering by proxy.”. Well, at least this so called world famous medical research institute 15 years after I gave the phenomenon the term ”Group Malingering by Proxy” admits that in their study of 13 children at least 3 of them were victims of this cruel assault. So 20-25% in this study were victims of crime. And in fact many tell that all children are victims but thats too embarassing to admit. The amount of apathetic children in Sweden counts up to 2000 so the victims of malingering by proxy might be at least as many as 500.    Which will make this to one of the biggest, most cruel and longlasting scandals in the history of medicine – SWEDISH HEALTHCARE HAS NOT ONLY FOR MORE THAN TWENTY YEARS TAKEN PART IN SEVERE CHILD ABUSE BUT ALSO STIMULATED TO THIS ENORMOUS COPYCAT EPIDEMIC WHERE INFORMATION EXIST THAT SOME PREVIOUSLY TOTALLY HEALTHY CHILDREN HAVE BEEN TUBE FED TO DEATH. Nina Fållbäck Svensson has without ever have met with or talked to Dr Jackson called Dr Jackson in his home and threatened and harassed him and publically told Swedish State Television and Swedish State Radio  she wants Dr Jackson never to be allowed to work in Sweden.

Nina Fållbäck Svensson is a former communist leader lacking every kind of medical training and has the main responsibility for the assualt on tube-starved refugee children in the county of Västernorrland. This illustrates the MAL-BP problem in Sweden. Swedish NHS is called SKR (Sveriges Kommuner och Regioner) and among SKR civil servants exist an intense resistance, and also among the politicians that rule Swedish NHS, to admit any wrongdoing in a process where doctors are lured to prescribe domestic tubefeeding, or be lured into medical negligence regarding these vulnerable children. 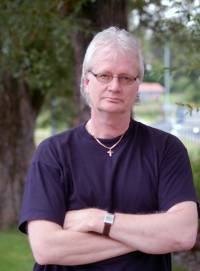 It also gives though a surrealistic impression that in their reference list of 35 articles Dr Karl Sallin and the authors do everything they can to avoid mentioning my name. Wonder why? Someone sholud ask them.

Even though I wrote two books about this cruel epidemic namely ”Veritofobi” 2008   http://www.adlibris.com/se/bok/veritofobi-simulera-sjukdom-apatister-och-apatiska-barn-9789186035792

And they even avoid mentioning the prize-awarded journalist Ola Sandstigs book ”The Apathetic Children – and the society that betrayed them”. Mr Sandstig mention namely myself on 6 pages and tells that I told the truth already 2006.

Here below is my extremely noticed article published 18th of January 2006 in Dagens Medicin- Swedens biggest medical paper. It is scanned from the paper edition because it was depublished from internet after 6 months. The article was referred to by a State Commission SOU 2006:49 as a probable explanation to why the children in Sweden were suffering from apathy or resignation syndrome. I.e. they were beaten, threatened and tortured by their parents and other adult asylum seekers in order to become traumatized enough to gain asylum. This as Swedish law tells that an ill child should be granted asylum.  This insight was though too much for Swedish proimmigration activists i.e. 95% of the journalists and Swedish rabiat pedriatricians. Especially public service that for years had told that they have discovered a new illness. Even a new diagnostic code in WHO diagnostic manual ICD-10 namely  F32.3A was given to this unexplainable disease.

Extremely sad to say even Karolinska Institute, Swedens prestigious medical university was obsessed with this diagnosis. In fact Karolinska Institute labelled for over 20 years severe child abuse as a ”new illness”.   SVT/SR i.e. Swedish public service characterized my article about malingering by proxy as a nazi production and told repeatedly to Swedish public that ”immigrants would never do this to their children”. So, it was hidden and depublished from internet by Kristina Kennedy, a feminist and Dagens Medicins editor in chief for years. After this defamation of myself the torture of children where some were tub starved for months and years, some to death, could go on for 15 more years. Until 2019 when a brave journalist from Swedish public service Ola Sandstig told in an article about the former apathetic children he had met and been told what a hell they have gone through. Mr Sandstig was awarded the golden spade for his work by Swedish Journalistic Association. 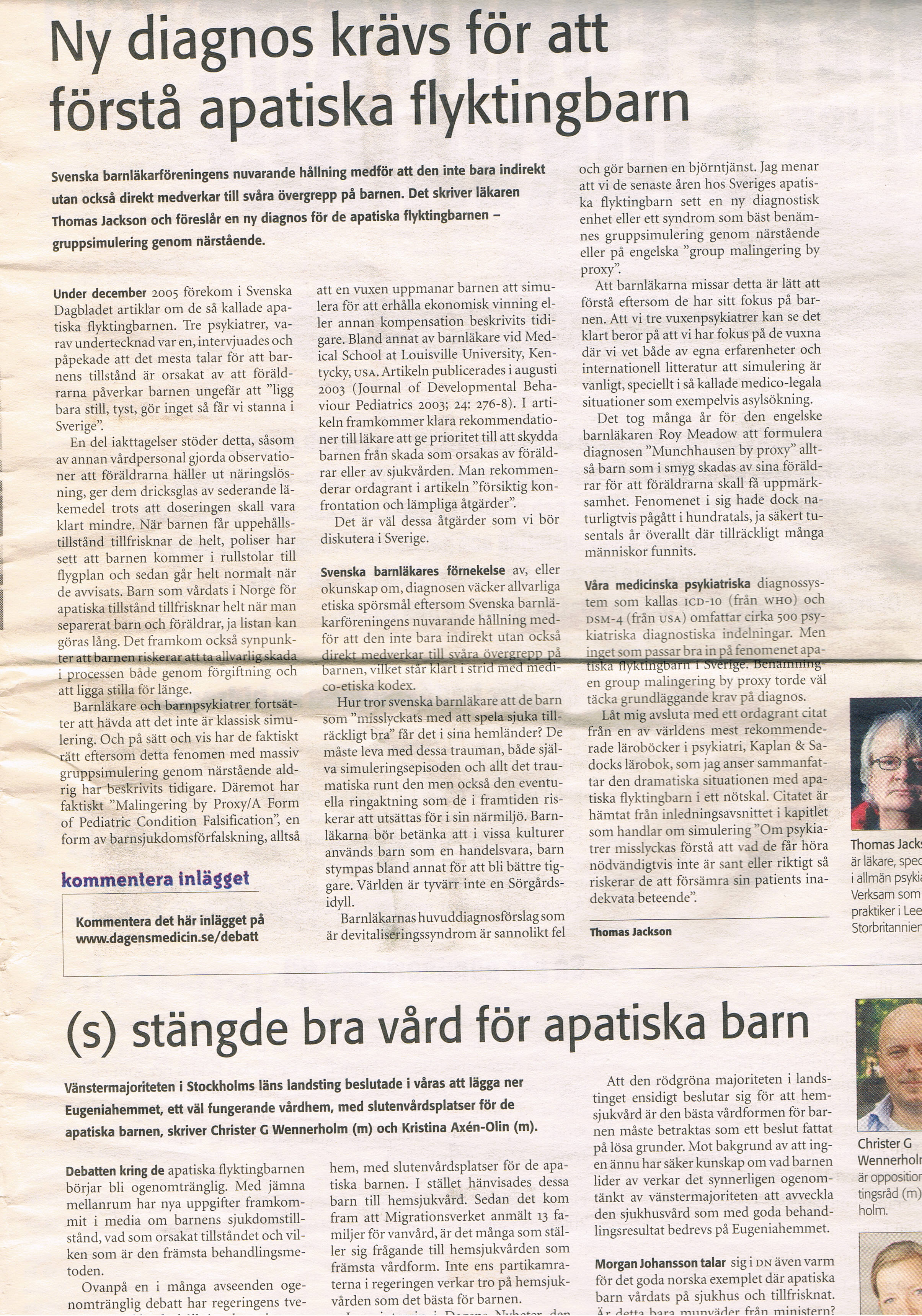 We reopened already 1st January 2021 but closed it again because of the brutality that is involved in the crimes against refugee children in Sweden. Due to threats we have had to close this website several times before. But now when even the famous Nobel Prize Institute tell that at least some children are vicitms of malingering by proxy this reduces the magnitude of the threats this website has received from criminals and traffickers. So we can today 12th of September open up again.

Of course the reason is also that brave Swedish journalists like Mattias Göransson, Ola Sandstig, and Main-Stream-Media like Expressen and others also have opened up for the previously unthinkable perspective  that Swedens so called apathetic refugee children are victims for induced illness or what by American researchers are called malingering by proxy.  This reduces the threat to Dr Jackson who therefor has decided to reopen this website. We let the article posted below stay as it is because it gives a background to why this site was inactive or closed for a period.

This website has been on the web for some years. Its main purpose has been to prevent malingering by proxy abuse of children, not only on refugee children.

Malingering by Proxy (abbr. MAL-BP)  situations mean for many children severe torture and eventually death after months and years of severe suffering including starvation by gastric tubes – the trafficker decides the amount of nourishment. Children are abused for financial and other gains.

In Sweden doctors associations, journalists, politicians and even the well known Karolinska Institute deny the existence of MAL-BP.

Swedish media have not even ONE time, i.e. not ever, discussed the term MAL-BP after Dr Jackson suggested the Malingering by Proxy phenomenon as the plausible explanation to the childrens horrible situation. Dr Jackson wrote about MAL-BP in a debate article 18th of January 2006 in Dagens Medicin.  Dr Jackson was then branded by an unanimous Swedish media lead by State Television ”a nazi suffering from xenophobia” and thereby all debate was quenched. Even though this term malingering by proxy was of decisive importance in a State Investigation SOU 2006:49 year 2006 that quoted Dr Jackson.

Swedish media that is very conformistic immediately shadowed the term, swept it under the carpet, beacuse of fear that the term might create hostility against refugees.

Karolinska Institute, i.e. the Nobel Prize Institution that choose the Nobel Prize winners in medical research has for 20 years spent enormous sums of money to find the answer to the apathy among apathetic refugee children. KI invented though a new term and dubbed them ”resignated children”, but has because of political correctness not dared  to tell the truth that the children are forced to mutism, apathy and tube feeding by traffickers and other criminals.

Dr Jackson has repeatedly been threatened by international organized crime with centers in Sweden. This because in Sweden thousends of traffickers use the staged event of Malingering by Proxy to get asylum and enormous financial resources are given them to care for these now after year long assaults severely traumatized children that cant move, are mutistic in beds, threatened, starved and beaten by carers if they speak or in any way communicate when Swedish doctors make domiciliary visits.

Dr Jackson has this week received implicit threats again. And he has decided therefore that this website must close. (But now reopened again as mentioned above).

A positive sign is that Swedens biggest daily paper Expressen last year finally opened up for some brave journalists that describe testamonies from these children how they ten years ago were beaten, threatened and starved for months and years until traffickers in this way could grant the family asylum. These brave young people, that once were victims of MAL-BP, are now again after they dared to speak up, under severe threats from traffickers to prevent them from continue their speaking and to stay quiet. So probably no more of these children dare to speak up.

And the tragedy continues in Sweden. Year after year after its start anno 1998. Today its anno 2020. An absolutely deceitful movie with evidently brain-washed directors and producers that certainly promotes this severe type of child torture called ”Life overtakes me”* about the children were Oscar nominated, se link below. Of course the children you see in this movie are in immensly better shape than other children that looked like Auschwitz prisoners according to Swedish Immigration Authorities year 2005.  But Swedish State Television and Swedish media silenced these civil servants too by branding them nazis when they raised concern.

So the basic and very simple answer to why this ”mysterious illness” continues in Sweden year after year is that everyone that tries to raise concern about this horrible situation is called a nazi by Swedish media. And if you are called a nazi in Sweden you lose your job, your friends and perhaps even your family. Thats why we have this mysterious illness in Sweden. And now the scandal is too big to disclose – so even if everyone today knows about the torture media just dont want to discuss it with the beautiful exception of Expressen and some right wing alternative media.

Here is a link to the article in Expressen:

Here is another link where Expressen requires a ”haverikommision” which means  ”Commission of Inquiry” that ought to be initiated from the Swedish Parliament.

Here is a good summary in English:

*Here is an article about the Oscar nominated movie. Its a tragic NETFLIX FRAUD.   The movie consolidates the big lie that the children are NOT victIms of severe abuse and that some might even have been starved to death by restricted tube feeding.