Autumn of 2005 Dr Thomas GA Jackson MD, PhD specialist in general adult psychiatry told in Swedish newspaper Svenska Dagbladet 14th December 2005 that the mysterious epidemic of unconscious refugee children probably is a variant of severe child abuse. He also told, knowing his countrymen well, ”probably I will lose any job offering in Sweden now because Swedes dont like to criticize refugees but this kind of child abuse is nothing any human being can accept”.

You find it in link no 1 below.

Next month 18th of January 2006 Dr Jackson gave a more comprehensive explanation about what until then was known about a pioneering research field in medical child abuse called Malingering by Proxy. A more sophisticated variant of Munchausen by Proxy. The first time the concept Malingering by proxy appeared in a scientific journal was June 1996 in Journal of American Academy of Child and Adolescent Psychiatry  36:1491-92 in a letter to the Editors by Cassar et al titled ”Can disability benefits make children sicker”. To emphasize that there are group pressure involved in this specific kind of induced or fabricated illness in children Dr Jackson suggested the term ”Group Malingering by Proxy” as everyone involved like parents, adult refugees, nurses, psychologists and doctors acted together as a coordinated group in the treatment of the child. Anyone objecting to group consencus from individual health workers  to doctors and even journalists with a critical view were excluded from raising concerns. Adult asylum-seeking refugees told ”our children are that traumatized and become worse if you doubt them so please… believe in the pain they have”.

You find the article by Cassar et al in link no 2 below.

Dr Jacksons article ”Group Malingering by Proxy/New diagnosis is needed to understand apathetic refugee children” was censored and depublished from internet on grounds it was regarded too critical against immigrants, xenophobic in nature and irrelevant. You can though find reminiscents of this article e.g. the term ”Group Malingering by Proxy” if you look at page 26 and on page 103 ”Jackson, T. (2006) Ny diagnos krävs för att förstå apatiska flyktingbarn, Dagens Medicin (www.dagensmedicin.se, 2006-01-18). ”  See link 3.

So. Below in link 3 you find the title in Swedish and the link to the State Investigation SOU 2006:49 that referred to Dr Jackson as a medical expert. To call Dr Jackson an expert became extensively critcized by well known Swedish professors in pediatrics and child psychiatry that told that Dr Jacksons views are  laughable and that a specialist in adult psychiatry should not trespass into other doctors specialist fields. These professors had strong positions at the world famous medical research center Karolinska Institute and initiated Swedish Medical Associations weekly Doctors Magazine/Läkartidningen to label Dr Jackson as a questionable figure. Some months before, fall of 2005,  responsible editor for medical debate at Doctors Magazine the journalist Jan Lind rebuked Dr Jackson in a letter and told ”You should learn how to respect your colleagues” as an answer to Dr Jackson when he wanted to publish his views in Doctors Magazine. In protest Dr Jackson after 32 years left his membership in Swedish Medical Association.  The reason for this uproar against Dr Jackson, a Swedish psychiatrist with an English name and for that time working in the United Kingdom, was probably that Dr Jackson told that Swedish pediatricians seem not to understand this kind of child abuse because it is unheard of in Sweden.

During February to August 2006-2007 something remarkable happened – the epidemic disappeared. 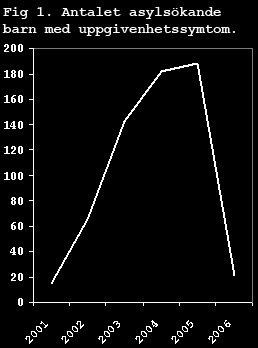 No one really knows why. However it seems to coincide well with an increased debate in Sweden latter half of 2005 about the apathetic or resignated children. The Green Party threatened namely to leave the government if the apathetic refugee children did not get asylum. Also at that period some journalists among others Christina Walden and Markus Lutteman at Svenska Dagbladet  published much welcomed articles and gave e.g. voice to health staff that told that the parents coerce their children to be tubefed and that staff is threatened and even beaten by adult refugees if they oppose to tube feeding.  Telling staff and doctors its their fault if their children die. The journalists wrote that no staff dared to raise concern in public for fear of losing their jobs. In addition to this three whistleblowers Dr Benz, Dr, Erikson and Dr Jackson, all three specialists in general adult psychiatry, raised their concerns in interviews (link 1) in Svenska Dagbladet.

A promising spring and summer of 2006

It seemed very promising summer of 2006. The tragic epidemic that used to be treated by a pretty non-medical arrangement as asylum finally had disappeared. The minister of immigration Barbro Holmberg (by the way Tiger Woods ex mother-in-law) had year 2005 in parliament given witness of dramatic and touching incidents where children seemed to be maltreated, coerced och harassed into inconceivable upsetting situations in asylum homes.   The professors at Karolinska Institute though objected strongly and told 2005 that its unethic and wrong to blame adult refugees because the whole family is in a terrible situation. But the increasingly number of sceptical journalists and doctors that now stood up meant that a barrier and taboo was broken. It was now accepted to criticize so called parental manipulation.

Swedish public service – SVT – which to the contrary to Svenska Dagbladet upheld strong alliances to the professors of Karolinska Instiute was since long before summer of 2006 very eager to scrutinize all the whistleblowers – everyone from officials at Dept of Immigration to psychiatrists that raised concern. SVT asked one of Swedens most respected and honoured journalists, an expert on structural racism, Mr Gellert Tamas to scrutinize the State Investigation SOU 2006:49. Mr Tamas spent eight months for this remarkable effort. He made hundred of hours of interviews and travelled all over Sweden and Norway to collect material.  And the result was spectacular. Mr Tamas program about the mystery of Swedish apathetic children proved beyond any reasonable doubt that the State Investigation was a result of a right wing extremistic network.

Then hell broke out. Everyone that opposed to take parental versions of the apathetic and resignated childrens state at face value was rebuked, possibly fired, called xenophobic, extremist or nazi. And the Governmental Expert was called a nazi because he told in the interview with Mr Tamas that he as a christian dont like multiculture but prefer living in a christian nation.

And children were again coerced to starvation by restricted tube feeding, coerced to mutism, bed, wearing diapers, and beaten if they opposed. For weeks, months and years. Some are today kept in a permanent dissociative paralytic state nurtured by their parents or adults without any family ties to the children. If the children get better they might lose their state salary which is enormous. One child can bring more than 300.000 USD to the caretakers. Who therefore dont want them to get well.

But Mr Tamas was celebrated like a hero because he had proved that the mysterious epidemic was a new disease, discovered by Karolinska Institute. Mr Tamas was rewarded the Ikaros Prize from Public Service and year after year Tamas was rewarded over a period of 12 years the finest imaginable Swedish rewards, e.g. the Torgny Segerstedt Prize. Segerstedt was a famous anti-nazi publisher during WW2.  Not yet the Nobel Prize though. But Mr Tamas was referred to in Swedens General Medical Councils Guidelines how to treat these vulnerable children. In short : It became forbidden to question what the parents or other adult refugees told. That was an expression of xenophobia and would risk the children becoming worse. The recommended treatment was asylum.

It took until 2019 before another journalist Mr Ola Sandstig began to reinvestigate the issue. After the civil war in Syria and the hundred of thousends of refugees, in fact over a million, that Sweden welcomed since 2010 the public debate became somewhat different. After the Swedish Democrats got seats in Swedish Parliament 2010 and then grew to be the third biggest party in Sweden people in general understood they might perhaps be allowed to  criticize mass immigration without being too ridiculed, fired from their job or not too harassed by journalists.

So. Mr Sandstig did look up some former apathetic/resignated children. Now grown up but sadly severely psychologically and bodily traumatized from the terrible abuse they for year had to endure. These children witnesses are enormously tragic.

Mr Sandstig was by rewarded the Golden Spade by Swedish Journalistic Association.  Mr Tamas has not been seen in public since over a year. But Tamas is safe. Swedes are good at staying silent. And absolutely no one in Sweden with the exceptions of some whistleblowers, a handful of journalists and of course the children tied to their beds and gastric tube feeding want to hear the unique story how everyone was fooled and that billions of health care crowns have been spent on child torture, asylum lawyers and intensive care units where the children are transported when adults want to give proofs the children are almost dying so they must have asylum NOW.

The children that now have spoken up are severely threatened. Too much money are involved and many other things. Who wants to have a Nobel Prize from a Committee that believe severe child abuse is a disease. Resignation syndrome got namely a tentative ICD-10 diagnosis 2013. 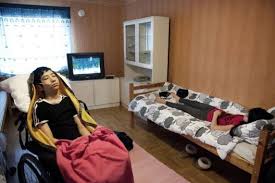 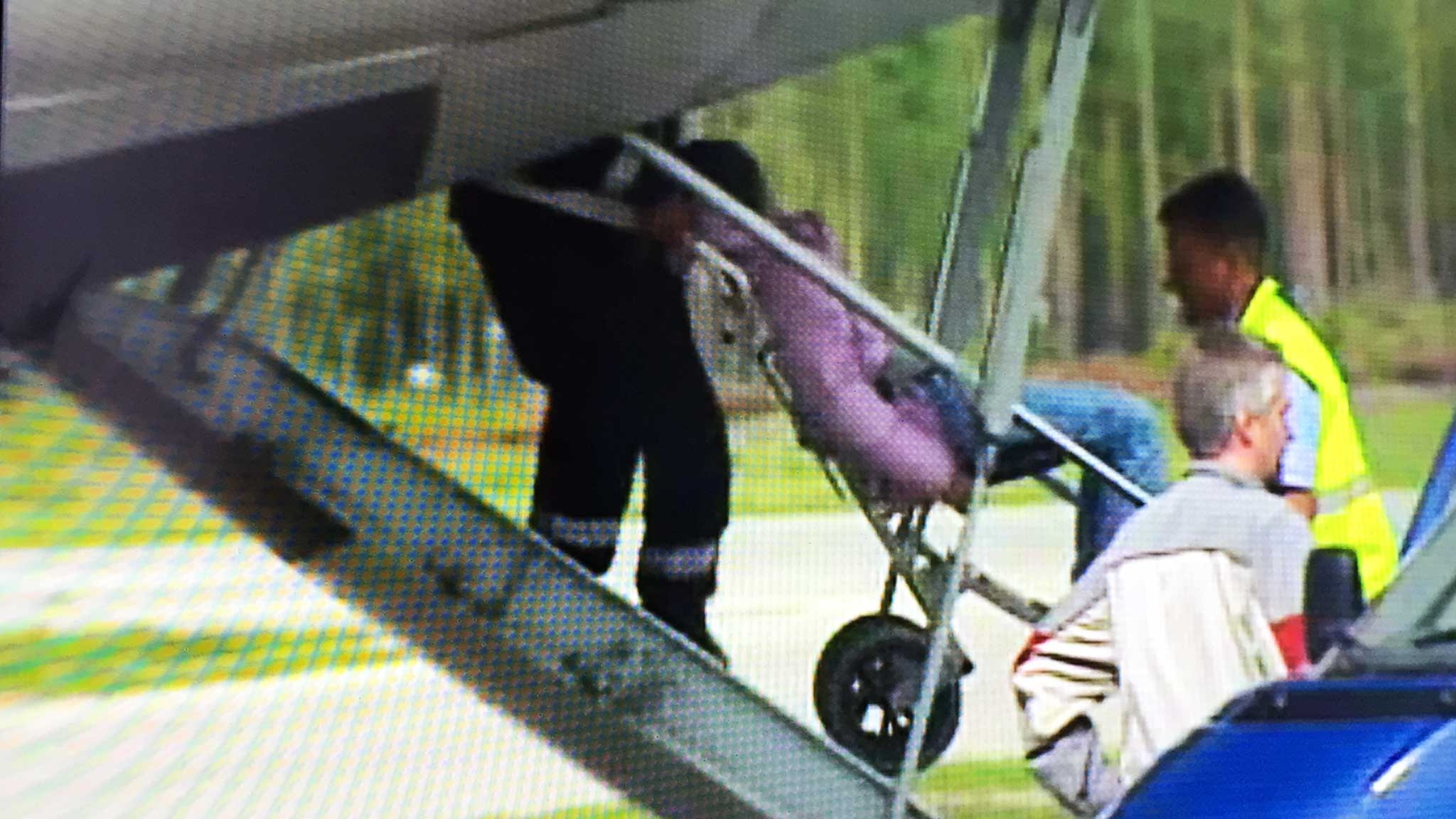