This new diagnostic entity, a severe variant of Malingering by Proxy/MAL-BP, will when time is mature i.e. after all political correctness that inflamed the tragedy, not only in Sweden,  have its name changed to COMMAND-SYNDROME or  Swedish-Command-syndrome when more than one vulnerable person is victim of MAL-BP mechanisms. This according to the wish of Dr Jackson. It should be discussed in established scientific conferences what name is most suitable when more than one victim exists.

Below and after the text and youtube interviw with Dr Jackson you find pictures of the suffering children.

Thousends of refugee children were fed by tube in a catatonic state for years waiting for asylum. The labour government that raised concern that the epidemic might be severe child abuse was fiercly attacked by media, Christian Democrats, Green Party, Communist Party,Liberals, Center Party. The Conservatives had divided opinions but under their new leader Fredrik Reinfelt they agreed with the Green Party, Communists and others that this enigmatic illness was a so called late onset Post Traumatic Stress Disorder (PTSD). A result from experiencing traumatic events in the country the children with their families fled from. When the children arrived in Sweden they were healthy but when their family were not given asylum they fell into a state of coma.

Jackson Mal-BP-syndrome is an exceptionally malign subvariant of malingering by proxy in children. In fact the term ”Commando Syndrome” has been suggested for this catastrophic state of health because it is clear that children in most cases are obeying orders and slowly develop a hysterical paralytic state because of the severe anxiety and uncertainty they suffer from. They lose all power over their situation, a helplessness and impotence they suffer severely from.  I am here discussing the severe abuse cases and not the mild cases where coerced malingering is part of the clinical picture. The syndrome is charachterised by mutism, immobility and passivity which most often develop parallel to tube feeding during years. In Sweden an epidemic of this syndrome started year 1998 among children to asylum-seeking families and ran totally out of control 2005 A.D. as doctors that tried to raise concern were described as racists by both Swedish media and pediatricians in charge for the treatment of these children.  And therefor nobody listened to the whistleblowers.  Thats why the epidemic still today December 2018 continues. Today around 30 asylumseeking children aged 8-15 years lie immobile and tubefed in Swedish Hospitals waiting for asylum.   What is extremely worrying is blood samples from the children showing extreme levels of stress hormones which indicates they the children are under intensive suffering both psychological and somatic. Link:http://bmcresnotes.biomedcentral.com/articles/10.1186/1756-0500-5-186

Jackson-Mal-BP-syndrome was initially described under the heading ”Group Malingering by Proxy” in Swedens medical newspaper Dagens Medicin 18th of January 2006. This diagnosis was welcomed and referred to by a Labour Government  SOU 2006:49, see page 26

and after this publication was spread over Sweden the epidemic of comatose refugee children disappeared for a period of approximately one year 2006-2007.

This state investigation was though one year later extremely critisised by Swedish Public Service and other Swedish media for being xenophobic. And political consensus shifted towards opinions doctors from the Karolinska Institute (Nobel Prize Institute) held. Karolinska Institute told they had discovered a new kind of pervasive refusal syndrome among asylum children thus denying all possibilities of malingering by proxy. This meant a shift in public opinion. The world famous medical research institute Karolinska told that the children suffered from a disease. And tragically (but not surprisingly) the  epidemic started up again. In some ways it actually seems like the shift away from SOU 2006:49 legitimated the epidemic (abuse according to Dr. Jackson) to start up again as every health professional that supported the state investigation were by Swedish press branded as suffering from xenophobia. I.e. it became immoral to support SOU 2006:49.

Criminal adults, according to Dr. Jackson, encourage, coach or coerce children to act according to instructions.  This situation in Sweden developed into a tragedy of thousands of asylum seeking children developing real comatose states while their families or adults in their company waited for asylum. Probable because in the early states of this severe parental coaching or abuse no one understands, not even the perpetrators, that prolonged coerced tube feeding has severe adverse effects on some extra vulnerable children. Many children also seem to be victims of starvation as asylum-seeking adults that are responsible for the tubefeeding in their temporary asylum homes reduce the calorie intake through the tube so some children loose up to half their weight, almost dying.   And no doctor can raise their concern because then they are described as nazis in Swedish media  and lose their jobs.

The syndrome appeared as an epidemic in Sweden year 2001 and still this very day year 2018 continues because of disagreements among doctors about its etiology. Most children wake up from their coma when asylum is granted but some seem not to regain normal conscious levels. According to Swedish Immigration Laws a very ill child grants the whole family asylum which might be the explanation to why adults induce illness in their children.

Except from the extraordinary situation described above Jackson-Mal-BP-Syndrome is characterised by treating doctors and hospitals becoming totally unwilling to discuss even the possibility that the children might be victims of illness falsification or malingering by proxy, despite compelling evidences.  This might be explained by legal circumstances because doctors and hospitals risk being taken to court for taking part in severe iatrogenic child abuse if the hypothesis of malingering by proxy is discussed, or disclosed. In other words – a criminal act is at hand.   So it develops into a kind of momentum Dr. Jackson has chosen to call 3+3 for the child:

So the child victim is trapped in a vicious circle. The sicker the child becomes the more taboo it becomes to alarm.  A truly paradoxical and utmost tragic situation.

If my way of reasoning is without common sense, without psychological or medical sense – please give me feedback by sending an email to   impo@live.se   or call Gustaf Nasstrom on phone number 0047-98189351.
Sincerely Yours

According to information from SKL (Swedish Counties and Cities National Association)  the costs for inpatient care for each of these apathetic children are 1100-1400 USD/per day and average treatment duration is 14 days.

Se below, language unfortunately Swedish but the content corresponds to what here is mentioned. Below. Sitting on a park bench. The ”journalist” behind the lies Gellert Tamas. He was given a mission from Swedish Public Services to investigate the epidemic of unconscious refugee children. Tamas told he found no child abuse and everyone believed him except all those that tried to raise concern and therefore by Tamas were  branded xenophobic and racists. All this because of just one ”journalist” without any medical training. (It has lately, fall 2016, come to daylight that he also lacks journalistic education or professional journalistic training which was unknown even for journalists at public service i.e. Gellert Tamas is just a wannabe-journalist which makes the scandal even bigger. Swedish media is of course dead silent about this). But 99% of Swedish media and journalists loved his story and celebrated Tamas as a hero. But he is a classical trickster!

The mass hysteria and psychosis in Sweden even led to a play ”Apathy for beginners” performed by the State funded National Theater organisation Riksteatern. You see the actors below. This play hail Tamas as a hero and makes a fool of the Migration Minister Barbro Holmberg (who by the way is ex mother-in-law to the golfer Tiger Woods) 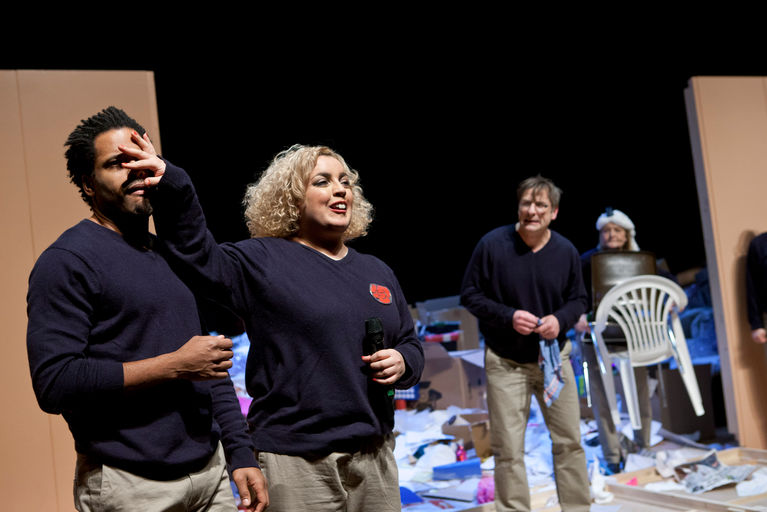